BEHIND THE MACHINES: KEVIN CLARE

MOUNT PLEASANT, Mich. — Owning a logging company that’s based smack in the middle of Mid-Michigan’s dynasty of wood chipper manufacturers isn’t a bad thing. Kevin Clare, owner of Kevin Clare Logging LLC in Mount Pleasant, Michigan, lives on the same turf that, until the last few years at least, was home to no less than five wood chipper manufacturers. The ranks are a bit thinner in 2015, but there’s still no question that Mid-Michigan is the place to be if you like turning big pieces of wood into tiny wood chips.

That also means logging companies in the area have the added luxury of choosing not just the best machine for the job, but also the best company to offer direct, factory support. Kevin’s choice of chipper manufacturers for his logging operation? You got it—Bandit Industries and the most popular whole tree chipper in Bandit’s lineup, the 22-inch capacity Model 2590.

“I’ve been in business for 15 years; I bought the company from my father, Bruce,” said Clare. “He was in the business for 40 years, always right here in Mid-Michigan. When he started it was all cables and chainsaws. When I came in, I expanded it to what we have now.” 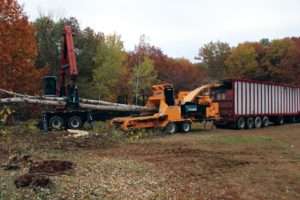 Today, Kevin Clare logging runs a fairly simple, but very effective, operation with a couple skidders, two slashers, a feller buncher, three trucks, and of course the Bandit. He has eight employees, a solid set of customers and clients for both his timber and his chips, and he’s booked up with work for at least a year in advance. Not a bad way to make a living in the logging business.

So then the million-dollar question is: why did Kevin choose Bandit with so many other choices and arguably the best support for wood chippers of any make, anywhere in the world?

“I had another chipper from a local manufacturer I’d been running, and one of Bandit’s sales reps stopped by to ask me about it,” said Clare. “We did a demo, and I ended up buying the 2590. And I love it, absolutely love it.”

Kevin’s Model 2590 is running a 525-horsepower CAT diesel, and he’s not shy about using it. Though officially rated as a 22-inch capacity chipper, the 2590 features a very wide 26 ¼” x 30” chipper opening and Kevin estimates that he’s used every single inch of it. Having an outstanding feed system doesn’t hurt either.

“I’M REALLY SURPRISED BY THE WAY IT FEEDS,” SAID CLARE.

“With our other chipper, we’d have to use the loader to jam wood into it. But the 2590, you just let it go and the chipper takes it right in. Especially when you’re chipping tops, the speed of it is impressive. It just gobbles the whole thing right up.”

Being a Bandit machine, Kevin also had good things to say about the way it throws chips. Though he didn’t specifically order the micro chipping option on this model, it did come equipped with Bandit’s card breaker system to help deliver a tighter, more uniform chip. Kevin said that it’s made a difference in getting him some chip contracts, but it’s also very easy to remove if necessary.

“The first time I demoed this machine, we backed the chip van up and it actually rocked the truck forward; it throws that hard,” said Clare. “And the chip quality is excellent; we don’t have [the card breaker] in now because our main client doesn’t need chips that uniform. It only takes 15 to 20 minutes to remove, and with it in we went to a university that was looking for biomass chips. Out of an entire load from this machine, there may have been literally a handful of chips that needed to go through their re-chipper. The rest were already good to go. They are fussy on chips and they were really surprised with the quality.”

With approximately six months of use and 200 hours on the clock, Kevin hasn’t had a single issue with his 2590. He’s throwing roughly 14 loads per set of knives in fairly dirty conditions, filling his chip trailers in about 20 to 30 minutes on average, chipping mostly tops. Kevin also says that his dealings with Bandit have been great, something that he found to be a bit better than some of his other experiences with different companies. In fact, not long after picking up his 2590, Kevin and Bandit worked together on a clearing project for the local community, getting the ball rolling on a new 3.5-acre off-leash dog park for the city of Mount Pleasant.

“I learned about the dog park when someone stopped and asked about renting one of my machines,” said Clare. “I was actually born and raised maybe a mile and a half away from where the park was proposed to be. Then [Bandit President] Jerry Morey got in touch with me about it; said there were some big trees in there and asked if I wanted to help out. And I sure did!” 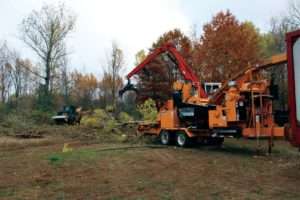 Bandit and Kevin Clare Logging worked together on the project in the fall of 2014, along with Mount Pleasant Rental Center and the city of Mount Pleasant. The combined volunteer force included Kevin’s new Model 2590 and several support machines to clear the grounds. Bandit was on-hand with a brand new Model 60FM—a mulching/mowing head attachment for skid-steers designed for light and medium-duty land clearing operations. A fleet of Bandit stump grinders also worked to clear the land in preparation for the next round of bids to complete the project in 2015. All total, the combined volunteer efforts saved approximately $50,000 on the project.

It’s work that Kevin Clare loves to do. As a lifelong logger and Mid-Michigan resident, he’s certainly happy to support his local community, and he’s definitely happy to have great local support for his Bandit; something that wasn’t always the case with his other chipper. And with a two-year old son growing up quick, Kevin has no plans to leave the area or trade his logging business for a day job. And why would he? With good equipment, good employees, good factory support at his doorstep and a great looking future, being a logger in Mid-Michigan is a pretty easy choice to make.

“I’ll be doing this until my boys take over, probably forever,” said Clare.