More Than Just A Number

Consider for a moment the number 24.

Math fanatics will note it’s divisible by a slew of other numbers. For many people, 24 is the age where they suddenly (and often horrifically) realize everything their parents told them was right. And of course there are 24 hours in a day, which for actor Kiefer Sutherland is enough to save the free world numerous times through an eight-season run on Fox, and a brilliant single-season reprise back in 2014. 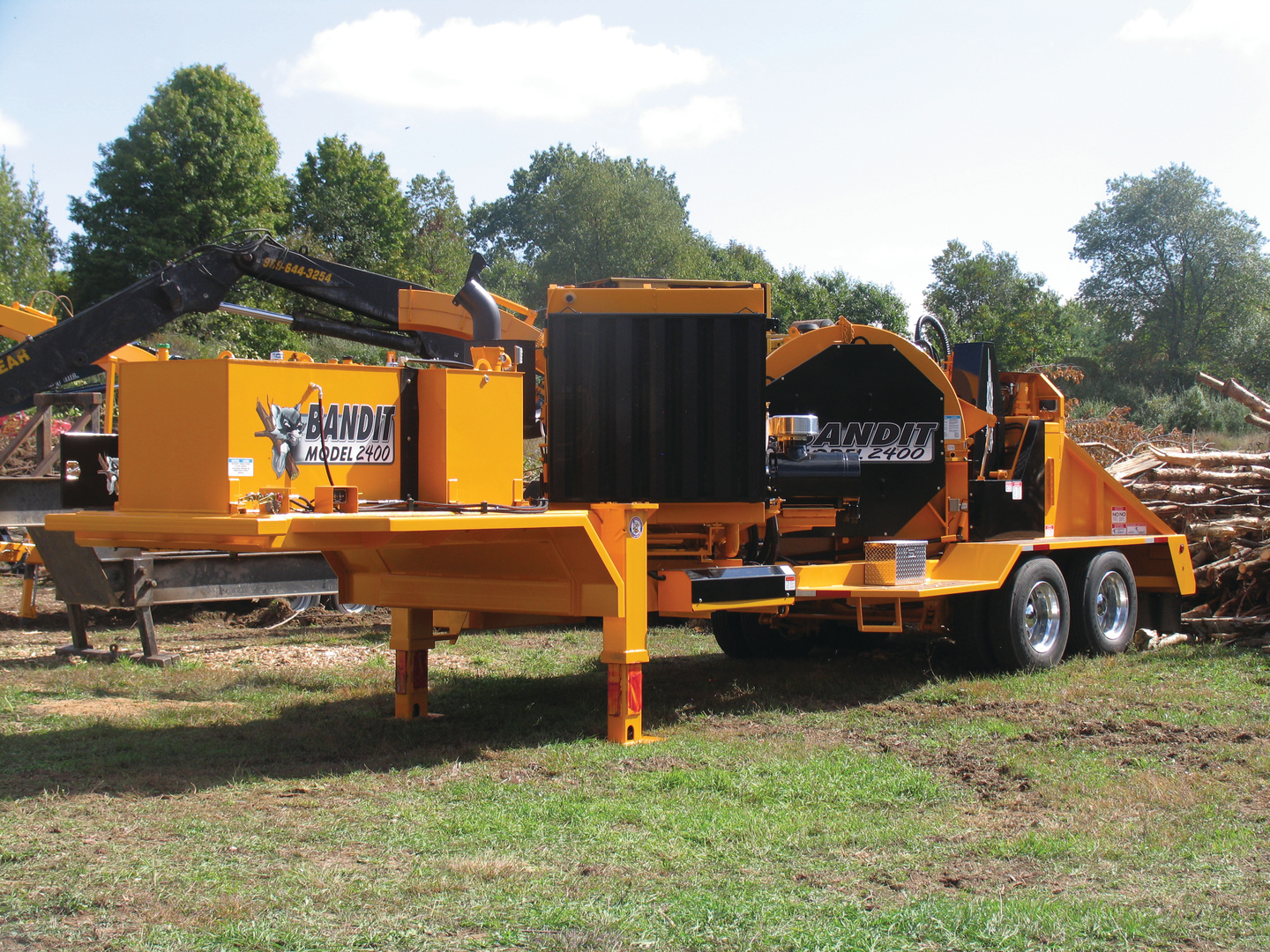 At Bandit Industries, 24 is more than just a hit television series. It’s also the chipping capacity for not one but two Bandit whole tree chippers: the Model 3090 and Model 2400XP. With powerful engine options and multi-wheel feed systems, these big Bandits are in the upper echelon of whole tree chipper performance. But identical twins they are not, because the 3090 wields a 37-inch diameter chipping drum while the 2400XP packs a 75- inch diameter chipping disc.

Both machines use feed systems featuring a combination of horizontal and vertical feed wheels, mounted in Bandit’s proven Slide Box design that provides direct down pressure. This design not only pulls in big trees easier and quicker than the other guys, it breaks down limbs and crotches that other chippers usually can’t handle. 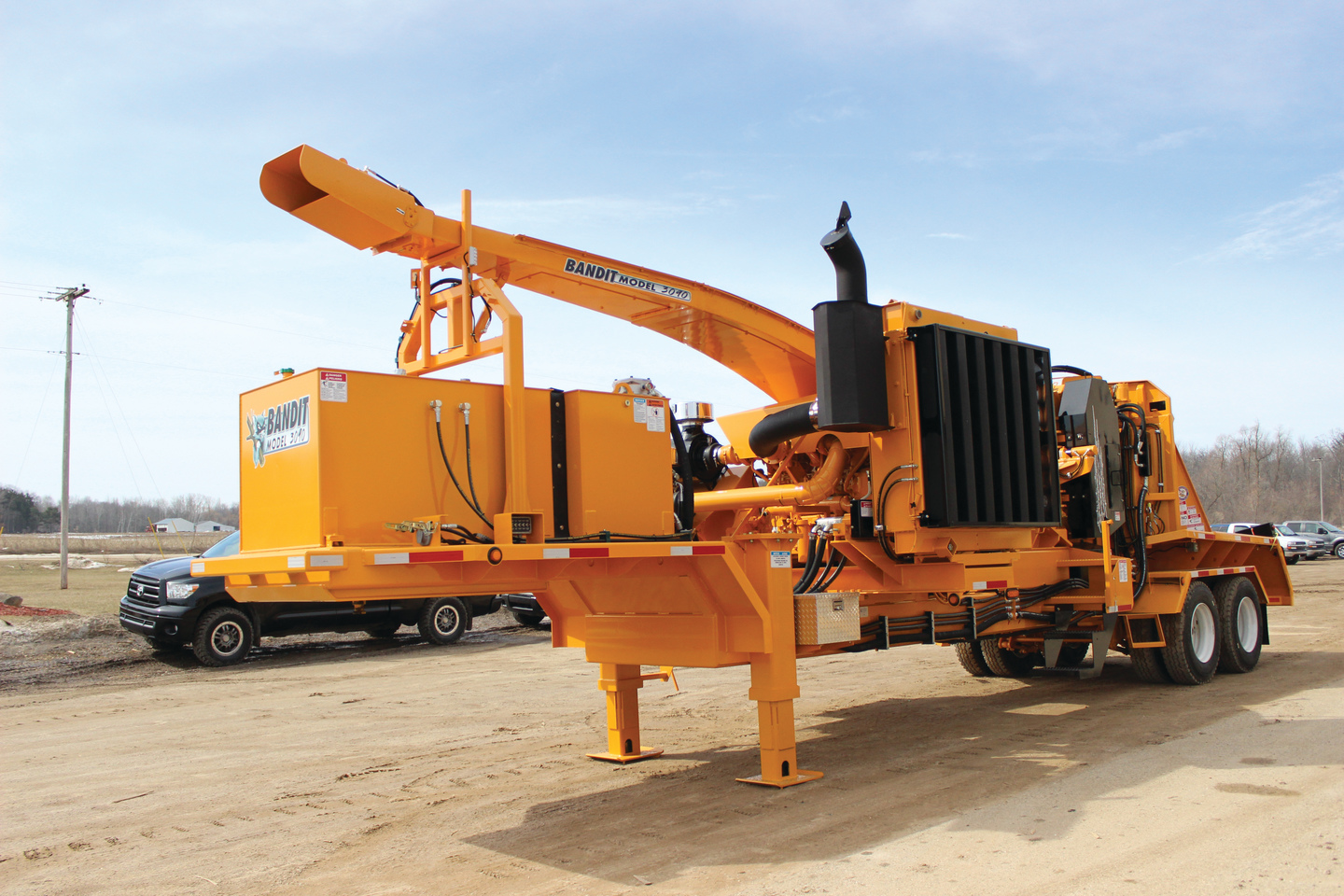 Each machine generates unbelievable chip throwing power without using any kind of auxiliary chip blower or add-on chip throwing device. Smooth transitions in discharges with proprietary designs in the disc and drum housings let chips move aggressively through the system, exiting with enough force to blast chips out the front of a 50-foot chip trailer. And with both chippers featuring engines up to 765 horsepower, fully loading trailers is not a problem. Side-by-side with plenty of material and skilled loader operators, both the Model 3090 and Model 2400XP can fill large chip trailers in a matter of minutes. How long exactly? That depends on many factors, but a good average number is—you guessed it—24 minutes.

So what separates these two 24-inch capacity Bandit chippers from each other? On the whole, disc-style chippers are a bit more efficient, operating with less vibration while producing a better quality chip. That’s because the disc constantly chips trees at an approximate 38-degree angle, cutting more with the grain of the wood for easier chipping. The drawback is that disc chippers aren’t as effective on limby, large material, when compared to drum-style whole tree chippers. That’s because the chipper opening on the drum-style chippers is larger.

The Model 3090 will have an easier time chipping material up to its full 24-inch capacity, especially if the material is extremely limby such as big brushy tops. And though chip quality generally isn’t as good as a disc, Bandit whole tree chippers set up for biomass chipping with card breakers installed can make high quality chips for a variety of users. That's especially true for the Model 2400XP, which produces an excellent paper mill chip that's consistent in size and thickness.

I needed to purchase a chipper to make a paper quality chip. I’d demoed a couple different machines and I really liked the Bandit. I talked to them, and I just felt like they were responsive and thoughtful of our needs in the woods and were willing to work with us.

The only problem is deciding which chipper is the best fit for your operation. An easy solution is to just buy them both, like Mike Sturgill at Precision Forestry Inc. did.

“I’ve had the 3090 for about two years now, and I got the 2400 earlier this year,” he said. Mike built Precision Forestry Inc. from scratch in the northern Lower Michigan town of Onaway, where he was born and raised. In 11 years he’s grown the company from just a couple people to a large-scale regional operation with 10 crews, 50 trucks, 80 trailers and 65 employees. He covers all of Michigan’s northern Lower Peninsula as well as the eastern Upper Peninsula. He also has a sawmill, and of course he has a pair of Bandits that supply all kinds of customers, including pulp mills and power plants.

“I needed to purchase a chipper to make a paper quality chip. I’d demoed a couple different machines and I really liked the Bandit,” said Sturgill. “I talked to them, and I just felt like they were responsive and thoughtful of our needs in the woods and were willing to work with us. I’d been talking to another manufacturer and they were like, ‘this is our product and we’ve sold a lot of them, so if you don’t like it we can’t help you.’ Bandit wasn’t like that at all—they didn’t have that take-it-or-leave-it attitude.”

The Model 3090 in Precision’s fleet runs a 700-horsepower CAT diesel. It’s a 2014 model that Mike purchased new from Bandit, but not before working with Bandit techs to equip it for his needs.

It’s a big chipper but it’s also a simple machine and it just works great. In two years we’ve only had a few small issues that Bandit helped us out with right away.

“Bandit did some work on this machine for us, installed the card breakers,” explained Sturgill. “It throws good; the breakers cut back on the throwing power just a bit but the quality is really good; it’s actually surprisingly good for making board chips. It’s a big chipper but it’s also a simple machine and it just works great. In two years we’ve only had a few small issues that Bandit helped us out with right away.”

It was this experience with both the equipment and the company that led Mike to return to Bandit at the end of 2015. He wasn’t looking to swap out the 3090, but rather to compliment it with a new disc chipper that would replace an aging disc machine from another manufacturer in his fleet. Bandit had already been working on numerous enhancements to the Model 2400, the biggest among them being a slight adjustment to the disc angle with longer chipper knives. The feed system was positioned closer to the chipper opening to further increase chip uniformity and prevent hang-ups. All Bandit feed systems are synchronized to prevent overfeeding which can slow production, or underfeeding which can create fines and odd-sized chips that mills don’t want.

These changes combined with other updates help the 2400 produce a precisely-sized chip, but more importantly, a chip that maintains a consistent narrow or thin thickness that paper and pulp mills prefer. 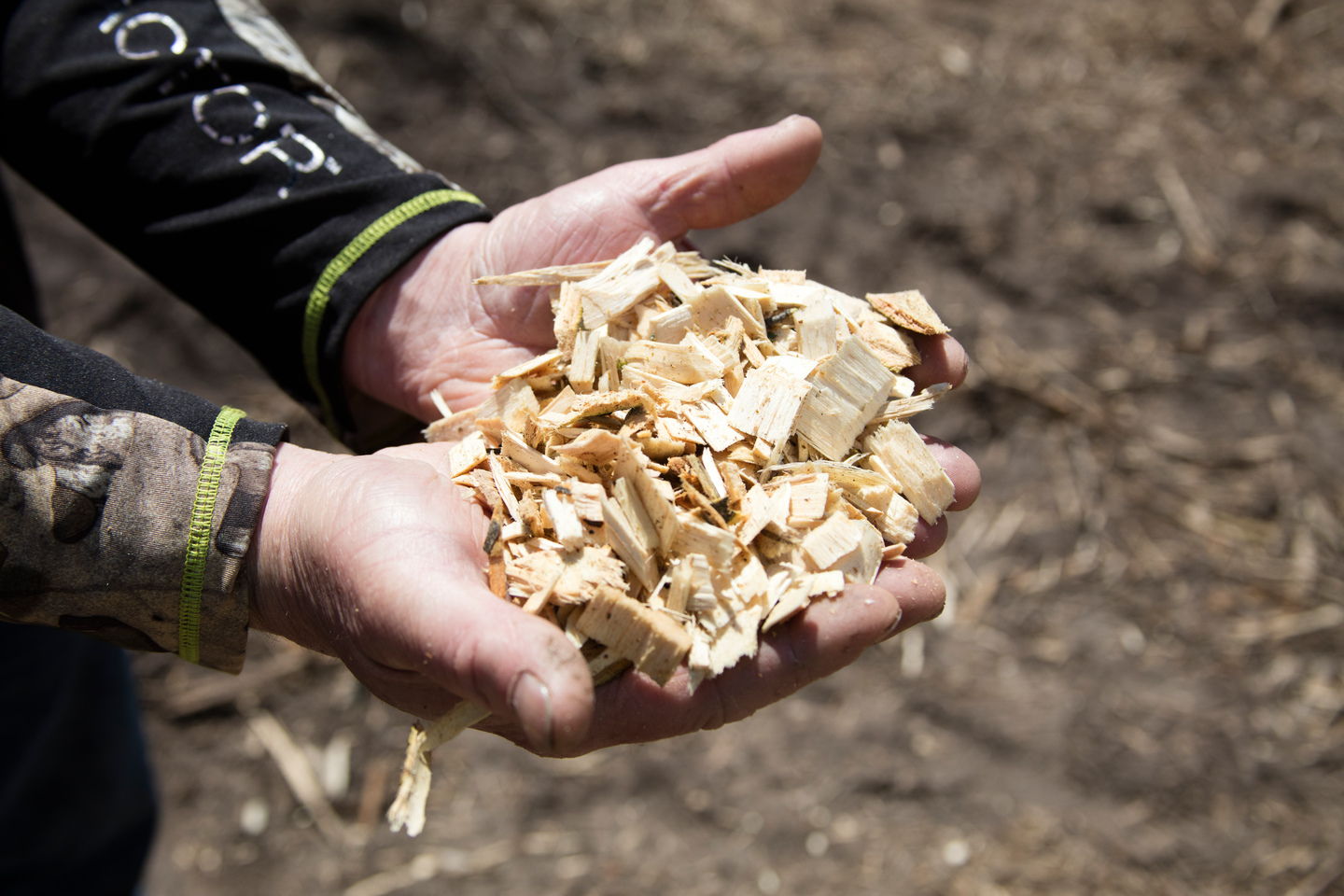 Thus the new Model 2400XP was born, and equipped with a dirt separator to further reduce contaminants in the chip flow, it was ready for action in Precision’s fleet. As with the 3090, Mike turned to Bandit for some in-the-field adjustments after delivery of the 2400XP to make it a perfect fit for his operation.

“We bought this chipper to supply a board plant, and Bandit’s done quite a bit of work to set it up for us,” said Sturgill. “They put a new chute on it, redesigned the card breakers – we’re chipping aspen and hardwood and had some issues at first, but Bandit really dialed-in the quality. They were willing to go the extra mile to make it fit our needs. The mill was really happy with the last couple loads of hardwood chips.”

Precision’s crews are still getting to know their Model 2400XP, as Mike figures only about 50 loads have gone through the chipper since they got it. He’s very impressed with the engine and feed wheel set up, and with Bandit taking care of his needs on the chipping front, he’s hopeful for the future.

They were willing to go the extra mile to make it fit our needs. The mill was really happy with the last couple loads of hardwood chips.

“We’re expanding into Canada a lot more; someday we might have a crew up there working,” he said. “Pulp is our main business at around 50 percent, with 25 percent being chips and the other 25 percent logs. We sell logs, lumber, pulp wood and fiber in four states and Canada so we’re pretty well diversified. The wood market is saturated right now so there’s not much room for expansion, but I’m optimistic. I think things will get better in a year or two.”

That diversification and optimistic approach, not to mention a good fleet of equipment, are major factors in the success of Precision Forestry Inc. Success has also empowered Mike to build a strong team that he takes good care of, and in return they take good care of the company. He’s proud to say that he’s never had to lay off employees.

“We’re able to float the slow times and stay strong, and since day one of my business, every employee has been able to work unlimited hours,” explained Sturgill. “We offer time-and-a-half, paid vacations, paid holidays, health insurance, 401K – we try to do everything we can for the employees, because they’re what made this company.” 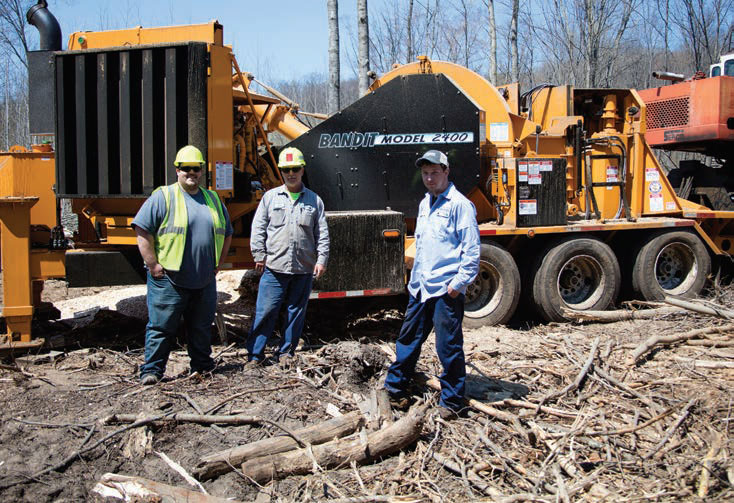 So the next time you happen upon the number 24, in addition to thinking about television and the good advice you ignored from your parents, you might think about the Model 3090 and 2400XP; Bandit’s similar-yet-different whole tree chipper duo. You might also think about Mike Sturgill and Precision Forestry Inc., getting the most from his pair of 24-inch capacity Bandits, loading trailers in 24 minutes while wishing there were more than 24 hours in a day so he could build an even stronger business. Not just for himself, but for his employees, his community and his family.