TORONTO – For a company to survive and thrive for decades, it requires keen leadership, savvy business sense and a constant eye to the future. In 2017, W.M. Weller Tree Service LTD. celebrates not just decades, but a full century of success as a family-run tree care company, serving an enviable list of municipal, commercial and residential clients in the Toronto area and throughout Ontario.

Enduring for 100 years goes beyond sharp business sense and inspirational leadership; it requires generations of enduring intelligence, persistence, devotion to the company and long-term dedication to customers. It requires the utmost communication and cooperation at all levels as the company’s legacy passes from generation to generation. 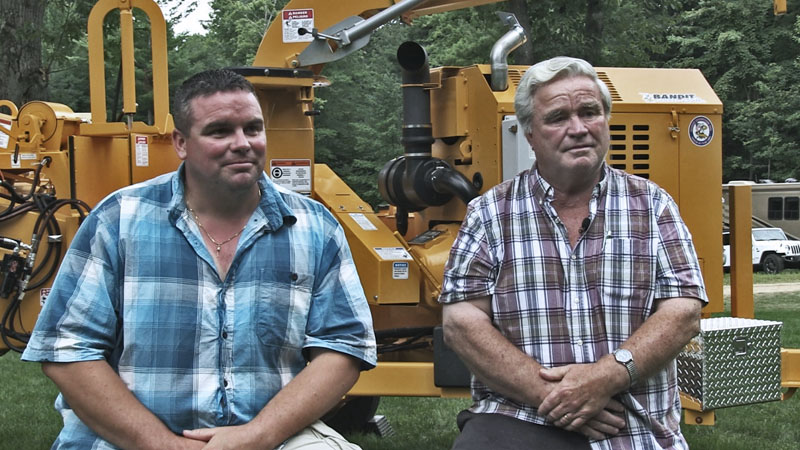 W.M. Weller Tree Service is owned by Bruce and Neil Weller, but the day-to-day operations of the company are now handled by their children.

“It’s just hard work, and any part of what you can call hard work,” he said during a visit to Bandit’s headquarters in Isabella County, Michigan. “It gives me chills to think about it—my son is here, and I have grandkids that are 15 years old that come out and help us. My grandfather started in when he was just a kid, moving trees by sleigh or wagon.”

It was Bruce’s great-grandfather Robert Franklin Weller who started the business in 1917. To give that some perspective, W.M. Weller Tree Service dates back to when World War I was still being fought. The National Hockey League was formed that year, and just five years prior was the sinking of the Titanic. The company predates the development of the first portable chainsaw, which debuted in 1918 but wouldn’t see widespread use for decades.

“My granddad starting using steam engines,” explained Bruce. “When I was a kid you’d load stuff on a truck by hand.”

It gives me chills to think about it—my son is here, and I have grandkids that are 15 years old that come out and help us. My grandfather started in when he was just a kid, moving trees by sleigh or wagon.

Today W.M. Weller’s fleet is large enough to keep 150 employees extremely busy. That fleet includes several large boom trucks, 20 knuckle booms, more than 30 Bandit hand-fed chippers and a few Bandit stump grinders. The day-to-day company operations are handled by Bruce’s children Michael, David and Christel and nephew Rob Weller, and Bruce says all the machines are out every day. In fact, W.M. Weller Tree Service is in such demand that they’re typically booked for work six months in advance.

“We work with about 20 municipalities and utilities, and lots of big high-profile jobs,” said Michael. “We also have about 100 clients that we’ve dealt with over the years, in some cases going back to the 1960s. There are many big estates in our area; if there’s a client that needs something we always try to fit them in. We look after the people we’ve served in the past, and we always try our best for churches, cemeteries, anything to help out our community.”

With such a year-round schedule, Michael says reliability of the equipment is key.

“We’ve been running Bandit chippers since the early 1990s,” said Michael. “Our first Bandit wasn’t brand new; I believe it came through an auction house. We brought it in and the reliability was there. When the machines are in the shop, they aren’t making any money. We’ve had other stuff in, but Bandit has always been the mainstay manufacturer in our fleet.” 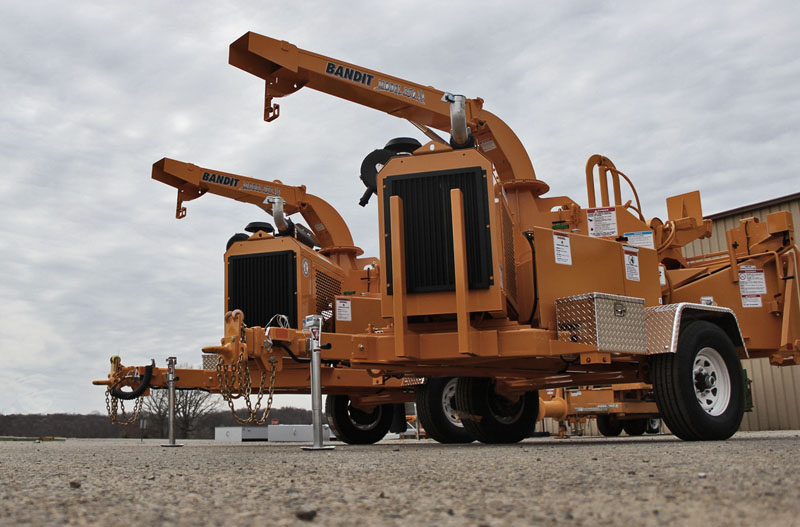 As W.M. Weller expanded through the 1990s, their need for equipment grew as well. Though the company had once employed 90 crews back in the 1950s, operating with 10- 15 employees had been the norm for much of Weller’s history. According to Bruce, that changed when his two sons Michael and David and nephew Rob got involved.

“They were pushing harder than what I was pushing to make it better,” he said. “You get all those minds working and it naturally grew. We started getting involved in bigger jobs; of course we had to add equipment and get better equipment. Our machines work all year, even our stump grinders and we get really cold in the winter. At one time we’d shut everything down at the end of October and not go back until the end of March, but the last few years we’ve been running them straight through.”

We’ve probably had at least 60 of them in the yard at some point. We have a lot of Model 150XPs, 200XPs; they’ve been great at battling the emerald ash borer.

“We’ve probably had at least 60 of them in the yard at some point,” said Michael. “We have a lot of Model 150XPs, 200XPs; they’ve been great at battling the emerald ash borer. We have Model 250XPs, and my favorite is the Model 255XP; that’s a mean machine. I’ve always preferred the disc chippers; we’ve had drums in the past but the discs are a good fit for the material we deal with. We deal with a lot of big removals so we’ll chip stuff right up to 12-inches or 15-inches in diameter. With the wide feed tables they pull in debris and crush it no problem. I’ll pull up to a job site and see some of the stuff the guys are feeding through, and I just shake my head—I can’t believe it’s going through as easy as it is.”

In addition to their fleet of Bandit chippers, W.M. Weller recently invested in Bandit stump grinders. They had specific grinding benchmarks to meet, and they found exactly what they needed with the Model 2890.

I’ll pull up to a job site and see some of the stuff the guys are feeding through, and I just shake my head—I can’t believe it’s going through as easy as it is.

“It was all about the depth,” explained Michael. “The first machine we bought was a Model 2650SP. It worked well, cut amazing, had the Revolution wheel on it, but the grinding depth on that machine was 18 inches and we needed 24 for municipal requirements. The Model 2890 is the only one able to meet that level, so we, demoed it and I took out a four foot ash stump in about 25 minutes. We’ve been running them now for a year and a half and they’ve been great.”

In addition to handling the day-to-day happenings in the business, Michael also manages the vast array of equipment in W.M. Weller’s fleet. In that role, he’s seen firsthand the literal value of Bandit machinery from an investment standpoint.

“I look after all our trucks and machinery and I sell much of our equipment as it ages, bringing in the new stuff and moving out the old stuff,” said Michael. “I’ve found that Bandit equipment is easiest to move out. Everybody knows it, and people are comfortable buying it.” 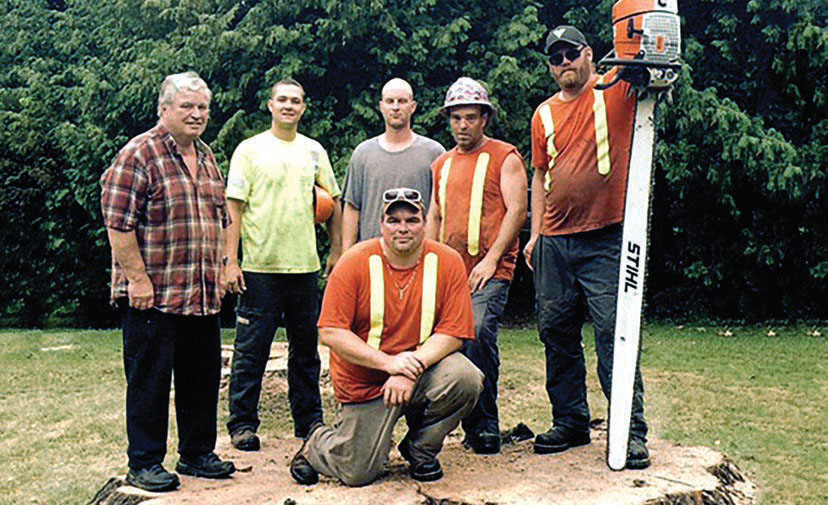 The large workforce, vast fleet of equipment and long history in the area makes W.M. Weller the go-to company when natural disasters strike. Emerald ash borer is rampant throughout the area which already keeps tree crews busy. There are also the wind events and ice storms that can lay waste to trees. That’s when the far-reaching experience at W.M. Weller comes into play. Talking with Bruce about such events it’s easy to see why they company has existed for 100 years.

“There was the big ice storm in Ottawa in 1998, and we had them in Toronto 10 years ago,” he said. “It’s not just about picking up the pieces; there’s a lot of ingenuity required, a lot of work to be done quickly. You need to have crews and equipment in the short term to get things cleaned up for people, but then there’s months and months of repair work; fixing broken limbs and trees. We had crews in the Ottawa/Kingston area for two years, and when you’re there, you’re away from other work you need to be doing.”

W.M. Weller is also the go-to company for work of a slightly more festive nature.

"Every year we do an annual Christmas tree for Nathan Phillips Square in Toronto; usually a 50’-60’ tree,” said Michael. “It’s a pretty fun thing; my uncle usually looks after that. He takes a crew down, they stand it up, put lights on it. We do a lot of big tree moving, not as much as we used to cause now we’re so busy in our area doing EAB (emerald ash borer) stuff.”

100 years in business is a tremendous milestone that few companies ever reach. But after talking with Bruce and his son Michael, it’s very easy to see the work ethic that’s led W.M. Weller to success.

“My great-grandfather was involved with the grafting of all the apple trees when they were putting in the orchards east of Toronto, and south to the lake,” said Bruce. “That’s how we got started, and in those years you had to go out and find different work so the company also built wooden bridges through the winter, moved houses, dock work, whatever they had to do to make a living. Then when Ontario Hydro came on we had lots of crews working in southwestern Ontario. That’s when things started to take off.”

That kind of longevity is also dependent on people truly loving what they do.

“I like being able to come into a job, especially with the big removals, where you see a big stone-dead tree,” said Michael. “We roll in with the big iron, and a couple hours later it’s gone. You drive away and there’s a nice clean area and a happy customer standing there. Much of our work is municipal so it’s like ‘on to the next job’ and so on, but at the end of the day it’s about production. At the end of the day, you like to see how much you’ve accomplished.”

Work ethic certainly matters, but for a family business to establish such a legacy for 100 years requires something truly special. That missing ingredient is often intangible, but Bruce sums it up perfectly with a short story.

I have my grandfather’s car; an Edsel he bought in 1958. He died in November that year; he had a steam engine shop and the day he died he hung his hat on a nail by the door, and it’s still on that nail. There was nothing really ever given away or dispersed over the years; it’s all still there. We still have the equipment from my great grandfather, my dad and such. From the 1920s up through the ‘40s and ‘50s, right up to our own equipment now. We could start a museum, but that car, that Edsel sits in my garage behind my house. And I take pictures of all my grandkids sitting on the hood of that car, because not everybody can say hey, that’s my great-grandfather’s car.”

Bandit Industries congratulates W.M. Weller Tree Service LTD and the Weller family for a century of success and service to their clients and communities. We are honored you’ve chosen Bandit to be a part of your company’s history.