Laying Down the Lawn

This story is a bit different, because the company spotlighted is none of the above. Yes, we’re still talking about a successful operation, and yes, it includes a Model 60FM, but T.J. Penick doesn’t have a tree care company. His core business is landscaping.

T.J. does a fair bit of land clearing, but not in quite the same scale or fashion usually associated with Bandit customers. He started Land-Rite LLC eight years ago in Brandon, Mississippi, and his niche is lawn and landscape maintenance with tractors and mowers. His one-man operation does not include wood chippers or stump grinders, though he often works with colleagues who handle tree removals.

Then in May 2015 he moved into a skid steer with a brush cutter attachment. Business picked up, especially on the clearing side. But even with the new gear and a busy schedule, he was still forced to turn some jobs away.

I have six attachments I use, and I have 41 hours so far on my new Bobcat. 40 of those hours have been spent mulching with the Model 60. I absolutely love it; it’s a bad son-of-a-gun.

“I got my first Bobcat with a 72-inch brush cutter, and I was just working wide open all summer and fall,” said Penick. “But I got tired of losing jobs because I didn’t have a mulching head. That’s when I decided to upgrade, so I traded up to a Bobcat T870 skid-steer loader and followed my local Bandit dealer’s suggestion on a mulching head.”

That suggestion was the Model 60FM. It takes only seconds to attach or remove from skid steers, but T.J. soon discovered he didn’t really need to detach it because he was using it all the time.

“I have six attachments I use, and I have 41 hours so far on this new Bobcat,” he said. “40 of those hours have been spent mulching with the Model 60. I absolutely love it; it’s a bad son-of-a-gun!” 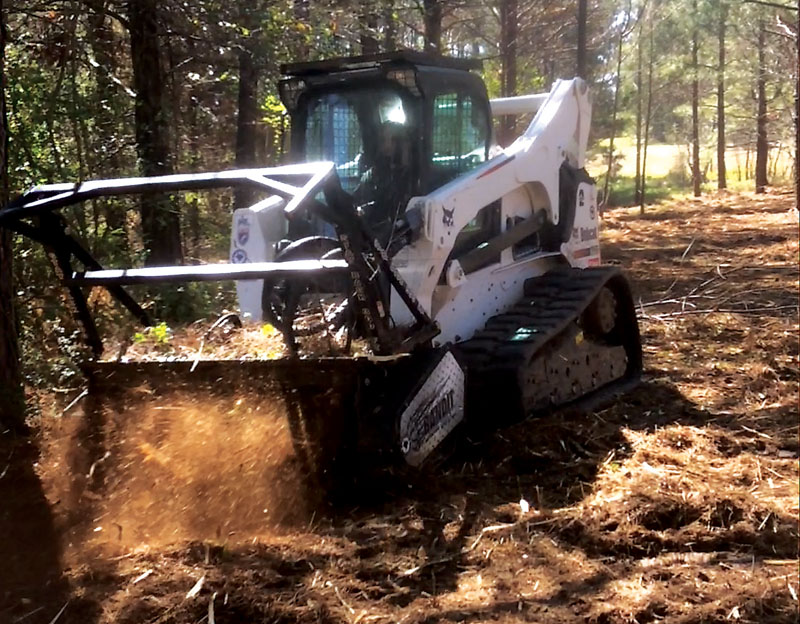 T.J.’s already busy schedule became even busier with the addition of the Model 60FM. Though he primarily works in the central Mississippi counties, he’s traveled all across the state for jobs that range from lawn work to clearing private lots. The Model 60FM has really opened things up.

“The first job I did had lots of really tall pines, maybe 40 total, with some up to 20 inches in diameter,” explained Penick. “A colleague dropped some of the trees close to the house, but I went through and mulched them all bottom to top, then mulched all the stumps into the ground. It only took about 10 minutes per tree. And I’ve often traveled for private landowners and for deer camps, sometimes just to turn the ground over. That’s where having a skid steer comes in handy, and with the Model 60FM I’m able to do a lot of mulching and clearing for food plots, building trails and roads, things like that. I wish now that I’d jumped into the mulching head right away instead of the brush cutter.”

T.J. is very proud to be self-taught in his line of work, spending hours upon hours in research mode while also learning from anyone he can. With such due diligence it’s no wonder his small land maintenance operation is such a success. It’s also the dedication to being informed that led him to Bandit when he decided to get a mulcher.

...With the Model 60FM I’m able to do a lot of mulching and clearing for food plots, building trails and roads, things like that. I wish now that I’d jumped into the mulching head right away instead of the brush cutter.

“I’d been around mulching heads a lot but I didn’t know that much about them,” he explained. “So I did my research, looked at all of the brands, and ultimately, trusted my friend Josh from Equipment Inc., Bandit’s local authorized dealer. The performance is great, and you can tell it’s well-built just by looking at it. Some of the other mulchers on the market look terrible, with tiny push bars and some don’t even have a push bar. The way the Bandit sits comfortably on the ground, and the way it sits level when I load it on the trailer, it’s excellent. And it just works awesome, 10 times better than running a brush cutter. I can just go after material with this; it just tears into stuff.”

With the new Bobcat and Model 60FM, T.J. is also working overtime showing off his capability and skill to potential customers. His wife goes out on most jobs to snap photos and video for social media, and the extra promotion continues to bring him new business.

“Up until very recently, all of my business was from word-of-mouth,” he said. “Now it’s still word-of-mouth, but the word is also traveling through Facebook. I’m big on posting before and after shots, and I’ll get messages from people asking about the equipment and if I can handle jobs for them.” 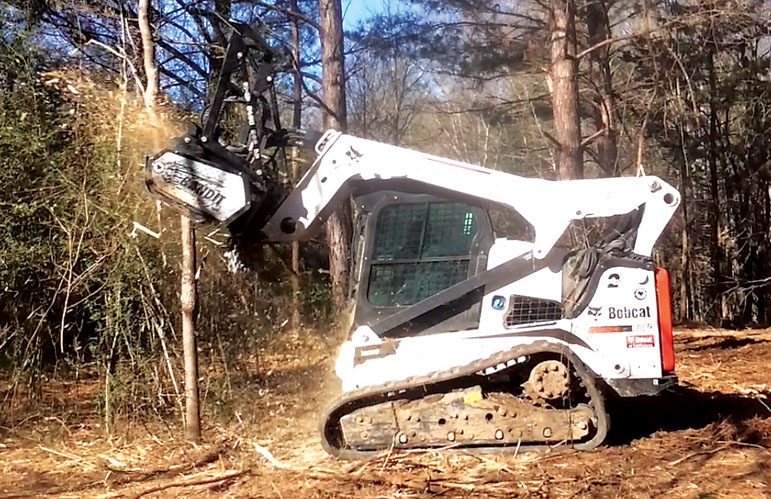 The combination of great equipment, years of experience and a knack for promotion is working well for T.J., and the future looks great.

“With my brush cutter I could go after some small stuff; six inches in diameter was where I was comfortable,” said Penick. “If it was soft wood I could mulch some of it down, but there were so many jobs where I wish I had a mulching head because it would’ve made the work easier. I should’ve sold myself on it sooner but I’m here now, offering clearing and mulching services, and I’m running the Bandit.”

Wood chippers, stump grinders and horizontal grinders have always had a place in landscaping, but such machines were generally the domain of those who specialized more in wood processing and removals. The Model 60FM certainly has a place among traditional Bandit customers, but its combination of size, power, capabilities and ease-of-use also makes it a game-changing attachment for landscapers and maintenance professionals like T.J. Penick. 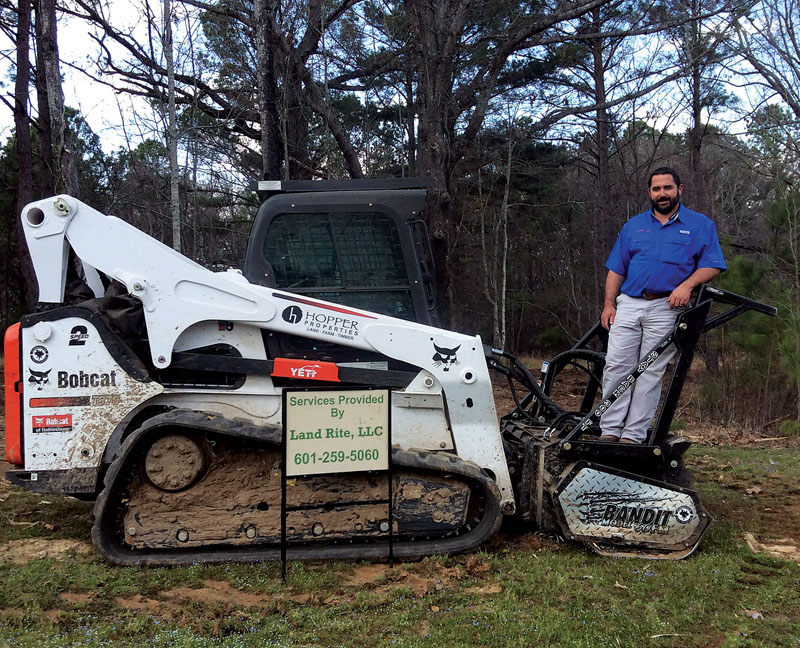 Bandit remains immensely proud and humbled to be the manufacturer so many companies turn to for innovative wood processing equipment. From national tree care organizations with hundreds of machines to one-man landscaping companies relying on that single key piece of equipment every day, Bandit will always be there to help you build your bottom line.