The Greatest Crew in the World

HASTINGS, Mich.— If this were like most case studies, right now we’d be talking about interesting locations and the awesomeness of Bandit® equipment. Instead, we’d like to introduce three people: Dan Smith, Matt Garrett, and John Gaskill Jr.

“Make sure these guys get a pat on the back,” said Gaskill. “Dan has done it all and he’s the best bucket man this side of anywhere. Matt, Dan and Johnny can handle anything. These guys are my hunting dogs, They’re all fantastic – I’ve got the best crew anybody could ask for. I don’t know what I’d do without them.”

I’ve got the best crew anybody could ask for. I don’t know what I’d do without them.

To better understand the context of John’s appreciation for his team, consider that he started his company back in the early 1990s. After a stint in sales he decided a career reboot was in order, so he bought a bucket truck and a stump grinder and turned his attention to the great outdoors. Those early days weren’t always easy. In fact, one year was downright brutal.

“I started out with junk equipment,” he explained. “The first Hi-Ranger I had caught on fire while I was going down the road; I managed to get out of it just in time. The second one broke down while I was in the bucket; I ended up falling and getting hurt. Then I got hit by a drunk driver – it was the same year the truck caught on fire. I was grinding stumps one afternoon and here comes a drunk driver, totaled out my pickup truck and my big towable stump grinder. Those machines were all I had back then.”

These days the machines are a bit better, but even if that wasn’t the case, his valued team would be enough to keep him going. Thanks to their dedication and the professionalism John brings to his business, Home Town Tree Service stays active with a range of clients throughout southwest Lower Michigan. He has a great contract with the city of Hastings, and the quality of their work brings new word-of-mouth customers all the time.

For a small company, John’s fleet of equipment is impressive. He runs a chip truck, a log truck, a 65-foot bucket truck, a pair of chippers and stump grinders, and a Bobcat to help with loading. The latest machines wear Bandit markings, including a Model 1890XP chipper that readers of Bandit Bits magazine might recognize from the 2015 Spring/Summer issue. More on that in a bit. 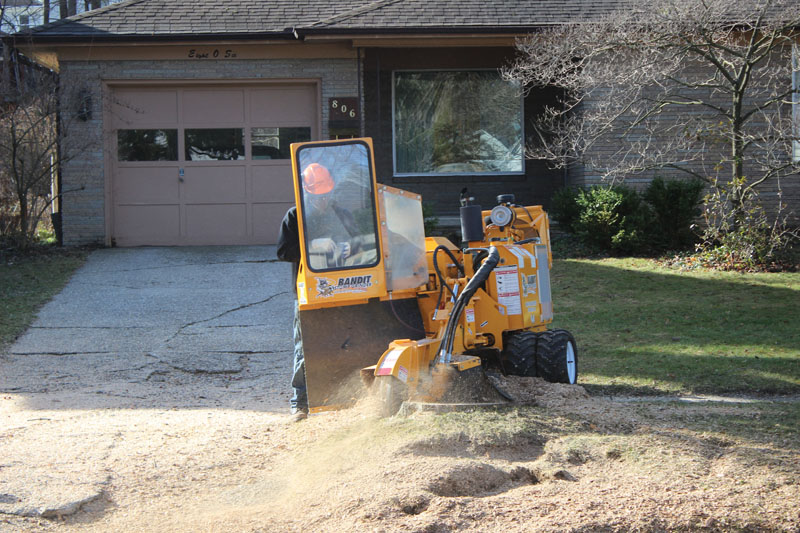 The newest is a Model 2550XP stump grinder that John purchased in the summer of 2015. He’d actually bought a stumper from another manufacturer, but after getting a runaround from both local distributors and the manufacturer on buying basic parts, he called Bandit for some help.

“I needed a belt and a pulley, and their local distributor didn’t know anything about parts so I called the manufacturer,” explained Gaskill. “They said I needed to go through the distributor. I fought with them on it, called the distributor back, neither were any help. But Bandit headquarters was just an hour and a half away, and they said they’d be happy to help me on machines. So I told the other guys to go take a hike. Bandit brought me a 2550, let me demo it for a couple days, and I bought it. It’s a good machine.”

John’s 2550XP has the 44-horsepower diesel, and to match his existing parts stock Bandit installed a standard wheel with Greenteeth. It’s become his go-to grinder for backyard projects where his larger tow-behind just can’t reach.

This is the only way to go – no belts or pulleys or chains. The sprockets aren’t going to wear out; I won’t have to change or adjust chains . . . Hydrostatic is positively the way to go. I wouldn’t have anything else.

“When it comes to doing a good detailed job in nice yards, that 2550 is the cat’s meow,” said Gaskill. “You can’t take quite as big a bite as you can with a big grinder, but it’s still quicker. You have to learn to get the hang of it. My big towable can power through a big stump pretty fast, but if you have six stumps scattered all over, this machine is a lot quicker.”

As for the maintenance that goes with the hydrostatic 2550XP, John is somewhat outspoken on the subject considering his bad experience with that other belted stump grinder.

“The belts and pulleys and all that crap; that’s what Henry Ford made Model T’s out of,” he said emphatically. “Those days are over. This is the only way to go – no belts or pulleys or chains. The sprockets aren’t going to wear out; I won’t have to change or adjust chains. If a hydraulic line breaks, I can get a new line made up from the shop down the street in a couple minutes. Hydrostatic is positively the way to go. I wouldn’t have anything else.”

When it comes to doing a good detailed job in nice yards, that 2550 is the cat’s meow.

Grinding stumps is only part of the tree work John and the boys handle, which brings us to that other “new” Bandit we mentioned earlier – a Model 1890XP hand-fed chipper. It’s actually a well-maintained 2004 model with 5500 hours that John bought a few months before the 2550. He purchased it from Mike Boles in Battle Creek Michigan, and if all that sounds familiar, it’s because Mike and his new 1890HD were featured in the Spring/Summer 2015 issue of Bandit Bits. The article also mentioned Mike was considering the sale of his old 1890XP “in the spring . . . if the price is right.”

As luck would have it, John and Mike knew each other.

“We’ve been friends for awhile,” said Gaskill. “We don’t live that far apart, and when I get an impossible tree, we usually go after it together. I called him up when I got that magazine in the mail, told him he was on the cover. Then I asked if he was going to sell that 1890! He asked if I wanted it so I went over to his place, looked at it, fired it up, and we shook hands. He about cried though; that machine was his first big buy. He put new knives on it, changed all the fluids and filters, set it up nice for me. He did me a real favor by selling it to me.” 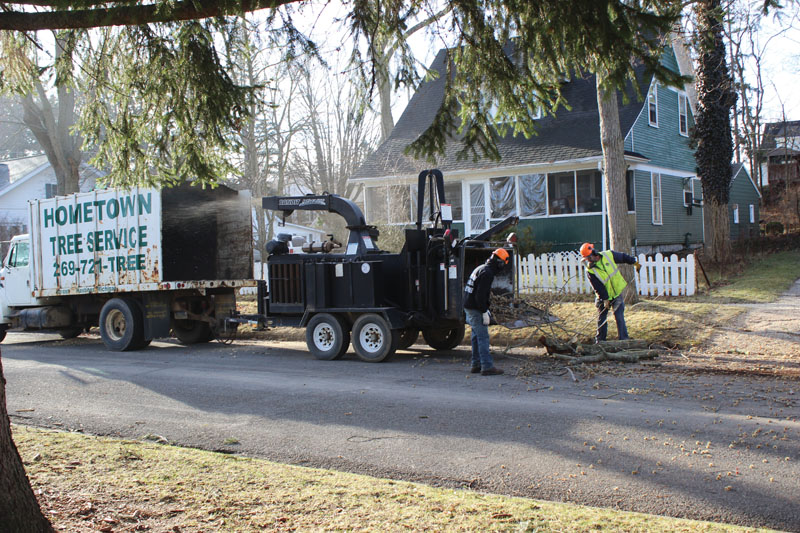 John’s Model 1890XP is a 19-inch capacity chipper running a 140-horsepower diesel. Even with over a decade of use and 5500 hours John says it still works great.

“I like the power, the auto feed and the dual feed wheels,” he said of the chipper. “The crush cylinder is great, and I’ll never be without a winch on a chipper again. And this machine has already paid for itself, easy. I’m setting up all-day jobs and we’re done by 11:30 in the morning.”

Good equipment and great people help make Home Town Tree Service the successful company it is. Speaking with John, it’s abundantly clear how humble he is with his success, and just how much his crew and his friendships mean to him. That kind of story is always nice to tell, especially in an industry where competition continues to grow. Even in his rural slice of America he’s frustrated by companies that underbid projects to a point where there’s either no profit, or not much quality in the work. That’s where his quarter-century of experience and a dedication to professionalism help build his client base. The old adage of you get what you pay for has never been more true than with John and his team.

this machine has already paid for itself, easy. I’m setting up all-day jobs and we’re done by 11:30 in the morning.

“The thing that’s made me the most money over the years is saying no,” he explained. “No to low bids, or negotiating big price cuts for jobs. I’m competitive on what I charge, and I’m proud of the work we do. And we’re professional – one F-bomb on the job and you’re fired. We present ourselves well, do good work and customers appreciate that. I’ve had people tell me they’d never hire other companies because of their actions and all the cussing. We get all kinds of referrals just because of the work we do. I’ve only got one tiny ad in the local paper, and that’s it. The rest is referrals.”

Of course, tree work isn’t easy. For every success story like John’s there are numerous failures. He could’ve went that way back in the early days when it was one disaster after the next, but instead of letting go he stuck to his guns and kept going. That’s really why Home Town Tree Service is a success. And that’s why John gets to work with the greatest crew in the world.

“This is a tough business; it’s no walk in the park,” he said. “I’m so fortunate to have these guys – there’s no way I could ever start over with different people. As long as I can keep them, I’ll just keep right on going.”