MIDLAND, Mich.— There's no secret to Matt Gilmet's success. The owner of M&M Stump Removal Service in Midland, Mich., says hard work is its own reward when it comes to his stump grinding business.

He's been at it for 18 years, grinding stumps for commercial applications, most recently with his new Bandit Model 2550 stump grinder. He's had municipal jobs, residential jobs, and commercial jobs. They're all grinding stumps, and he approaches them all the say way: Do the best you can – do better than expected.

"It's not a secret," he said. "It's just common sense. When you hire somebody to come work for you, if they do an awesome job, you come back to them all the time. To me, that's been key. I always make sure that I take care of customers."

Gilmet is a straight shooter, and he doesn't mince words. He's also the best at grinding stumps, and when it comes down to business he'll do the best job out of all his competition. He’s a master at work; he's likely ground tens of thousands of stumps over his career and it shows. His hands move over his machine's control panel without moving his gaze from the grinding head. Of course, he got to this point only after putting in the necessary hours to earn his honorary title. That means mostly 12- or 14- hour days, working all through the spring to the fall, only quitting when the light fades for the day or frost settles in for the season.

"You can have a two-foot stump, a two-foot area that you need to grind, and typically it's gone, eight inches deep, in two to three minutes. It's a quick little rig.

His Model 2550 stump grinder is well suited to his style of work. It's ready to go when he is. The unit is four-wheel-drive, so it’s quick and nimble from stump to stump. And with 44 horsepower at his fingertips, it's got the power Gilmet needs to handle anything that comes his way.

"It's a sweet little machine," he said. "I love it. My typical job takes me about 20 minutes, in and out. I'll grind four to six stumps in that time, load back up and go."

Gilmet worked with Bandit to select the options he needed for his use. There's no swing-out operator's console or remote for him. Instead the controls are mounted on the side of the unit. A push blade on the end of the unit makes it easy to clean up chips. The only thing he could say negative about the machine is the fuel tank. He'll get about six hours on one tank, which is plenty for most people. But most people aren't grinding stumps 14 hours a day.

"It's a spectacular little machine," he said. "You can have a two-foot stump, a two-foot area that you need to grind, and typically it's gone, eight inches deep, in two to three minutes. It's a quick little rig."

M&M Stump Removal has been busy working for the city of Midland the last few years grinding ash stumps. Emerald ash borer has stuck Mid-Michigan hard, and the city of Midland has enacted a plan to remove those trees before they pose any threat. Gilmet was hired to grind those stumps. 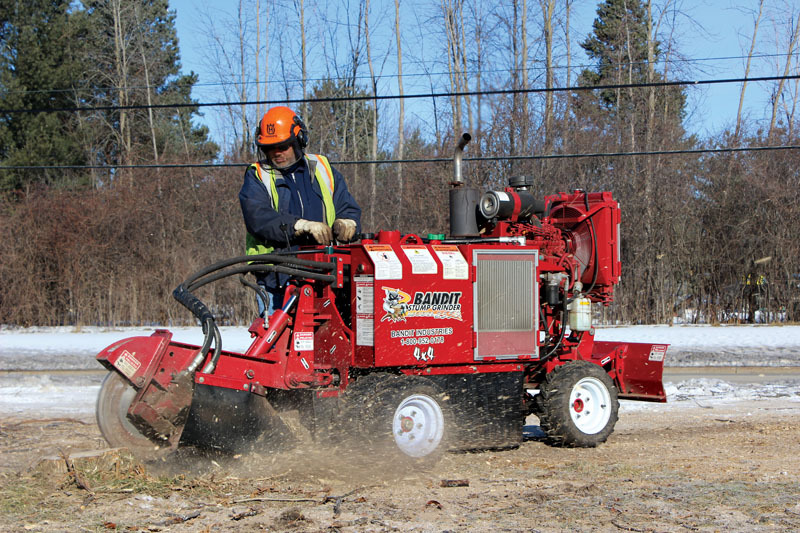 "I've been doing this the last three years," he said. "The first year, I did about 750 stumps for the city. I did maybe about 600 the second year, and last year I've done about 500. Most of them have been ash."

Helping Gilmet get rid of tough ash stumps is the Bandit Revolution cutterwheel.

He said with his Revolution wheel, he only has to replace his lead teeth on the front of the wheel, and typically he's swapping those teeth out with other teeth on the wheel.

"Typically the only teeth I change are the ones on the front. Maybe once a year I'll have to change some of the leading side teeth or even just flip them around because just the top portion of that tooth is worn, and the bottom side is still good," he said. "If I just flip it to the other side, I'll get really good wear out of it."

Gilmet first came to stump grinding while he was working for an equipment dealership in Grand Rapids. He picked up stump grinding on the side because his brother's business was clearing trees for power lines in northeastern Michigan. The two brothers partnered, but eventually Gilmet moved away from grinding stumps.

When he decided to make the move to Midland to be closer to the woman who would become his wife, Gilmet figured he'd start grinding again. His wife wasn't sure he would make a living grinding stumps. Obviously he graciously proved her wrong.

"I really wanted to start my own business," he said. "And I wanted something that I could do by myself. I've been going since then, so you know, it's been 18 years. I've made a very good living.”

What I really like is with the Revolution wheel, there's no pocket wear. And the pocket wear gets expensive when you're doing a lot of stumps.

Gilmet's success can be attributed to a business philosophy that is a combination of common sense, his college classes and great advice from a very famous radio announcer that’s he’s never forgotten.

The common sense portion of his philosophy is to partner with good people. That included distancing himself from tree companies that he felt did inferior work, and only working with people he trusted.

“It just doesn't get you very far when you start affiliating with the wrong people. It can cause you a lot of grief," he said. "I've been fortunate because a lot of the people I've met have been professional and they do quality work."

That includes his relationship with Bandit Industries. Even before he owned a Bandit, Gilmet had his stump grinder serviced by Bandit, which is headquartered only about an hour away. He said his proximity to Bandit made it an ideal partnership. 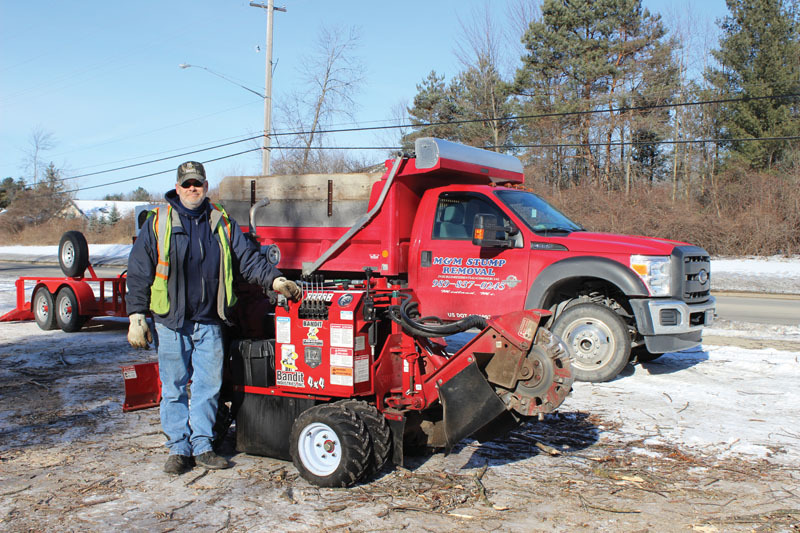 From his college classes, Gilmet remembered a professor who told him that most of his business would come from a few of his customers.

And the advice from the radio? It came from legendary broadcaster Paul Harvey. Gilmet was a fan for years until the broadcaster's death in 2009.

"He said if you want to stay in business, do it 10 percent better than your competition and you'll always have work," Gilmet said. "I've always tried to keep that premise in mind."