Tracking The Fires In California

The trees were nearly dead when the fires came.

They stood dry as kindling all across California, acres upon acres of forest land stressed beyond the breaking point. Depending on who you talk to, California’s four-year drought is the worst since the infamous dust-bowl of the 1930s, or it’s the just the beginning of something far worse. Evidence from geological core samples and tree rings indicates megadroughts have occurred in the American west throughout history. Such events are not measured in years, but decades or even hundreds of years.

As such, tens of thousands of California residents in some of the state’s most dangerous wildfire zones held their collective breath, waiting for the inevitable fire storms to come. They spread quickly, consuming more than 300,000 acres and thousands of homes throughout 2015. Those lucky enough to reach safety were helpless as they watched and waited for news about their homes. For a lucky few, there was something to go back to. Others lost everything. Nine people lost their lives.

There is some good news, however. El-Nino has delivered much needed rain and snow to the region through the winter months, with above-average precipitation recorded in many areas as of February 2016. That can temporarily help fire conditions, but one season’s moisture won’t replenish what’s been lost. Nor will it erase the charred trees left in the wake of the fires. 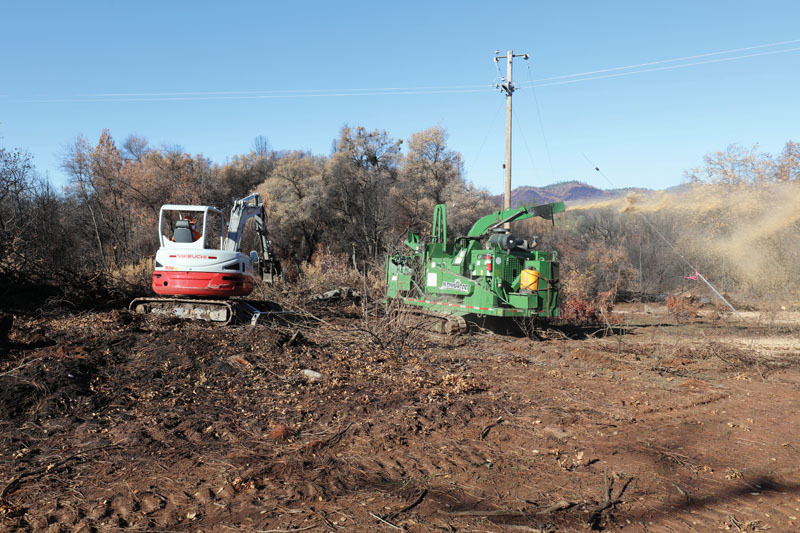 “On a job like this, you realize how useful those track chippers are,” said D.J. Gomes, owner of Crossfire Tree and Vegetation in Paradise, California. “We’re able to get to places that we just couldn’t reach with a towable chipper.”

He was working a scarred ridge after a recent wildfire that burned through a densely populated mountainside in mid-California’s Sierra Nevada range. Specifically, his small crew was tasked with clearing burned trees along a power line. It’s a task ideally suited for Crossfire’s Model 255XP track – a big 15-inch disc-style chipper that was custom-built for Gomes approximately a year ago. Considering that Crossfire Tree and Vegetation specializes in fire mitigation, the 255XP has become an integral part of the company.

We’re able to get to places that we just couldn’t reach with a towable chipper.

“The trees are freshly burned, so there’s still a little bit of moisture in the logs,” he said, referring to the material going into the chipper on the burned ridge. The trees will dry further as time passes, making the material even harder to chip so working fast and efficient is vital. The 255XP’s processing power and all-terrain capability help make that happen, while its relatively compact size keeps it maneuverable in tight quarters. But Gomes points out the impressive throwing power of the big disc chipper as a major advantage, and one of the reasons why he chose the 255XP.

Moving the discharge with the radio remote, he can spread the charred chips evenly while the throwing power keeps them from piling up. This not only returns the nutrient-rich chips to the soil, it also acts as a form of dust and erosion control, both of which can be serious problems following a fire. Having used a competitor’s drum chipper prior to the Bandit, he used to spend valuable time spreading out chips using a skid-steer loader.

“When you have to move those piles a hundred times, it stops the work I was brought here to do,” he said. “It’s just wasted time.”

Gomes said he’s not the only one impressed with the production of his Bandit. At jobs where he’s been one contractor among many, the Model 255XP has consistently outperformed just about everything else despite having 142 horsepower – usually the smallest engine among the other contractors.

“The disc is incredible,” he said.

Fire cleanup and fire prevention has always been a big part of tree crews’ daily work in California, but the drought has only magnified the importance of mitigation.

Scott Serenbetz, owner of Bushwakers Inc., has been in business for more than 30 years. Most of his work is preventative when it comes to fires, but as the drought stretched on and as the fires grew in both size and frequency, he found himself picking up more cleanup jobs. Bandit Bits caught up with his crews in December 2015, working in the aftermath of a another devastating forest fire.

“Some people are scared,” he said. “And with the ongoing drought, it only seems to be getting worse.” 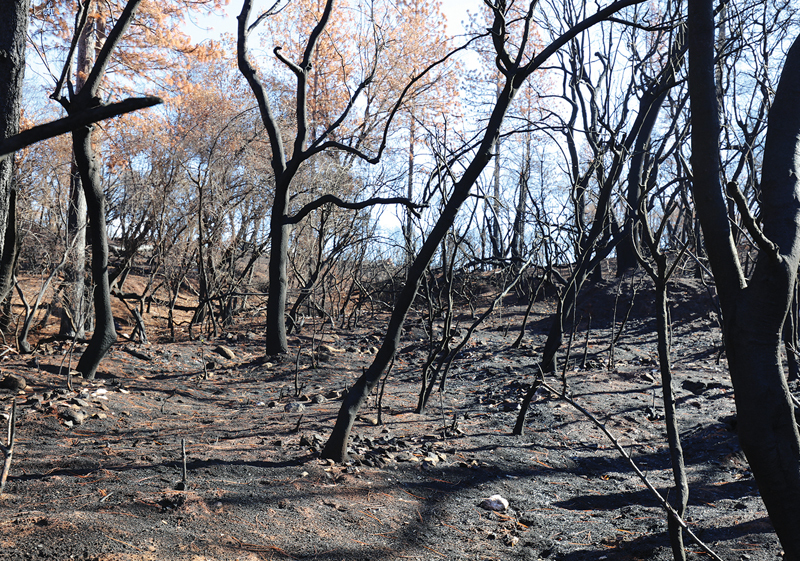 Like Gomes and his crew from Crossfire Tree, Serenbetz and the Bushwackers team were handling cleanup on a charred ridge. As for equipment, Serenbetz gets a bit more aggressive by wielding a pair of Model 1890XP track chippers to simultaneously cover different areas of the worksite. Each machine has its own crew, cutting trees which are then fed via mini excavators with knuckle loader attachments. Technically the 1890XP is an 18-inch capacity hand-fed chipper, but its oversized 20.5 x 26-inch throat opening is easily large enough to handle big stems that only loaders can handle. And the steel-track undercarriage lets these chippers work on steep slopes where a normal chipper couldn’t possibly reach, never mind competitive track machines.

“The steel tracks give us the confidence to go into an area we wouldn’t normally go with even a rubber-track chipper,” he said. “Earlier this year, we did a mile of clearing in a canyon building a fire break. We had to winch the trees to the chipper because it was almost too steep to walk.”

The persistent drought and the onslaught of fires have certainly taken a toll on California, from residents who lost homes to the picturesque country side. But whether it’s working clean up or fire prevention, there’s a terrific satisfaction that Serenbetz and his crew experience after a successful job. Despite the many years he’s been in the business, he says that warm feeling never goes away.

The disc is incredible.

“When you go through and do a good fire break, it makes the area look like a park,” he said. “It’s nice to see when the customers are happy with the result, and it actually improves the land. There’s gratification from that point of the work.”

Ryan Bellanca feels the same way. He’s the owner of Bella Wildfire and Forestry Services, and as the name might suggest, he’s made a living helping people and communities mitigate their properties in the face of fire danger. Should the unthinkable happen, he’s right back on-site to help with the cleanup. It involves plenty of one-on-one work with customers, but his small crew based in Central California has plenty of experience to handle both the grunt work and the PR. And with the help of two Model 1590XP Track chippers from Bandit, they really make a difference.

“A lot of the work that we do has to be done with a track chipper,” Bellanca said. “Wheels just aren’t an option when you’re talking about working in some of the wildland we do.”

He purchased his first Model 1590XP Track a year ago, and he says it’s been a dependable addition to his crew with zero issues. He followed it up with a second 1590XP Track that he was lucky to get ­– with work being so plentiful in California for chipper crews, he said track chippers don’t sit in dealer lots very long. With 147 horsepower and impressive throat openings that are nearly 20 inches square, the 18-inch capacity Model 1590XP Tracks are easily able to handle large branches and even moderately sized whole trees. 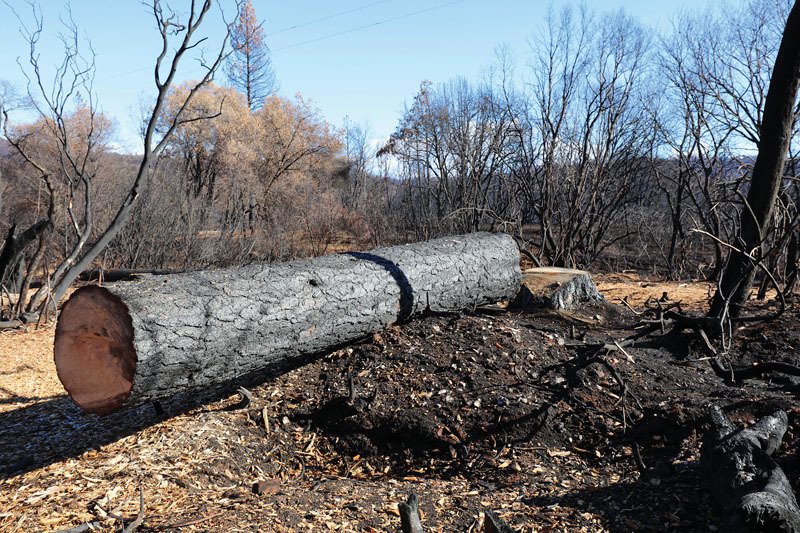 Bella Wildfire and Forestry Services specializes in green space and fire prevention management, and the last few years have certainly seen plenty of new business in that regard. Mitigation around a property is one of the best chances people have at saving their homes in the event of a wildfire, and though Bellanca would welcome conditions less favorable for such fires, he feels fortunate to be able to make a difference.

Some of that pride stems from his background as a firefighter, battling wildfires right out of high school. He then studied forest management at Humbolt State University, earning a degree in forestry and fire management. As such, he brings numerous levels of invaluable experience to his customers not just in forestry, but in firefighting and prevention. The addition of his second 1590XP allowed him to double his work load, which for him means he can help twice as many people.

“Really, that’s what it’s about at the end of the day,” he said. “That, and trying to keep our forests as healthy as possible through expert management and practical solutions.”

A lot of the work that we do has to be done with a track chipper.

Fire is a natural cycle of nature that’s as tragic as it is rejuvenating. Even with indications that California’s drought could be easing, Santa Ana winds and dry air will always combine to create a perfect storm for wildfire. These are just three small stories of companies doing what they can to help stem the tide, and Bandit is proud to be the chipper manufacturer they look to for the specialty equipment they depend on. To all the tree services, arborists, foresters and professionals working to create healthier forests while reducing fire risk – from California to around the world – thank you for doing what you do. It’s demanding work that is often misunderstood or taken for granted, but it improves forest health while saving property, homes, and lives. You’re making a difference, and in the end, that’s what matters most.